The proof is in the pavement 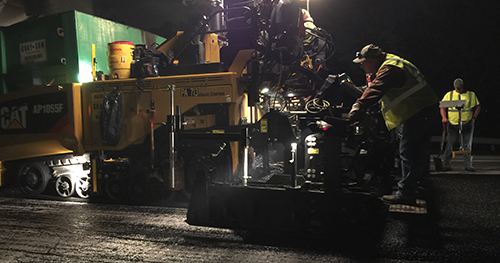 Ingevity has participated in numerous projects demonstrating how warm mix SMA produced with Evotherm® can eliminate the need for fibers. But what if you’re a contractor or agency trying to use Evotherm for the first time? What does the process look like? What are some of the challenges in making this change? The state of Maryland has some answers.

In late May 2017, Maryland Paving wanted to use Evotherm on a SMA project on Interstate 195 (I-195) in Baltimore. I-195 is the main connection between terminals at the Baltimore/Washington Thurgood Marshall International Airport and highways like I-95, I-97 and Maryland 295 that lead to the cities of Baltimore, Annapolis and Washington, D.C.  Prior to this project, Maryland Paving had tried a small portion of fiberless SMA with Ingevity’s Evotherm® in 2016 with great success.

Maryland Paving has been supplying hot mix asphalt services since 1964. The company operates six asphalt plants across the state of Md., plants that continue to be recognized by the National Asphalt Pavement Association for their “Diamond Achievement Commendation.”

Although Md. DOT was a pioneer in the use of SMA across the U.S., they were still new to the capabilities of warm mix additives in SMA. The challenge for Maryland Paving was this: If they used Evotherm in the SMA mix to remove the expense and hassle of fibers, then the mix would only require 6.1 percent liquid AC. But the state was requiring that SMA mixtures be at least 6.5 percent liquid AC. Maryland Paving worked with the DOT to demonstrate how warm mix was a more cost effective alternative for SMA mixtures, which would require changes to the specification.

“It was a challenge to provide a cost-effective SMA mix before Evotherm,” explains Jeff Graf, Vice President and General Manager at Maryland Paving. “Adding Evotherm allowed us to eliminate the use of fibers and decrease the amount of AC needed. That’s a cost savings right there. Plus, we were able to reduce paving temperatures by using warm mix. Then our conversation with the DOT became less about not meeting the specification, and more about why changing the specification to enable the use of an additive like Evotherm could be better overall.”

“We were able to produce a fiberless SMA mix with Evotherm at temperatures as low as 270F,” reports Mike Harris, Quality Control Manager at Maryland Paving. “The mix ran great while at the plant.”

“The gauge technician was skeptical that the mix would compact at lower temperatures,” explains Pete Truncale of the field applications engineering team at Ingevity. “Even as temperatures of the mat decreased, compaction numbers on the gauge rose. Maryland Paving saw densities of at least 96 percent.”

In the end, Evotherm was the proof in the pavement that enabled both Maryland Paving and the DOT to win.