Adventures in the last frontier 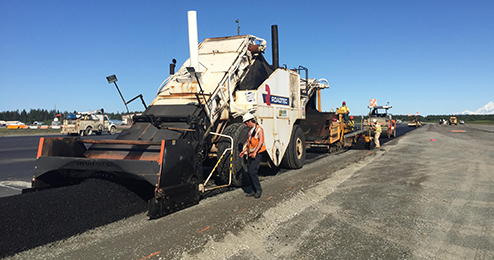 Alaska in June is prime paving time, even with temperatures still ranging from 40°F to 70°F. This year the Alaska Department of Transportation (AKDOT) chose contractor Knik Construction to pave the runway of Yakutat Airport. Evotherm® was Knik’s technology of choice for this project. Located in southeast Alaska, Yakutat is relatively isolated from road or rail access, but has daily commercial jet service at the Airport that connects with Juneau, Cordova, Anchorage and Seattle. For years, Evotherm has been used in Alaska at standard HMA temperatures as a compaction and workability aid, as well as a liquid anti-strip. This airport project was one of the first times true WMA has been placed in AK.

Amanda Gilliand, Project Manager for Knik Construction, explains: “Our goal at the Yakutat Airport was to reduce temperatures enough to demonstrate that it is possible to achieve good paving results at temperatures lower than traditional HMA.” Plant production and laydown on Day One dropped production temperatures from 320°F to 290°F with Knik’s 64-28 ER. Day Two saw production temperatures as low as 270°F. Gilliand continues: “By lowering temperatures, we also saved money on diesel burner fuel. We are now considering the possibility of plant dosing so that we have the flexibility to change the Evotherm dose based on haul distance and weather variations.”

Indeed, the use of WMA at true WMA temperatures in Alaska has just begun. Stay tuned for reports of the continued adventures of Evotherm in The Last Frontier.