The Taming of the Shingles

I recently worked with Century Asphalt in Texas who evaluated using Evotherm 3G chemistry to get Recycled Asphalt Shingles (RAS) and RAP back into his mix design.  The contractor was forced to take out all the RAS and lower the RAP percentage in his HMA design when workability and uniform compaction became an issue on a long haul project.  The mix was made at 320 °F and hauled 70 miles, only to show signs of clumping, poor workability, and inconsistent compaction results behind the screed. 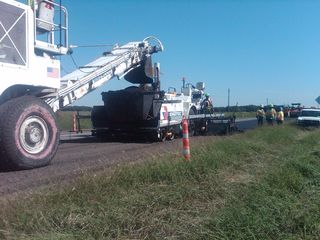 We added Evotherm to the mix at a low dosage (0.3%) with the hopes of resolving the issue.  At this dosage and standard HMA production temperatures of 315 °F, the contractor was able in increase his RAP percentage to 17% and add 3% RAS to the mix.  The response I heard from the field was very positive, with the laydown crew commenting that workability had improved greatly and there were no visible signs of clumping.  I was also told that density readings became very consistent across the mat.  As an added bonus, with the addition of Evotherm, RAS, and RAP into the mix, we were able to save the contractor 30% in virgin asphalt.