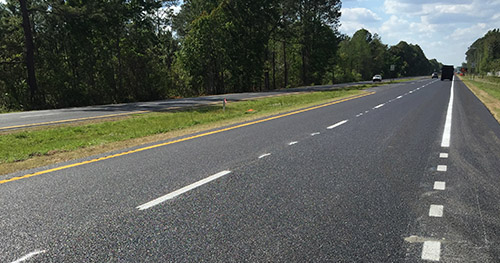 MC Hammer pants, fanny packs, the California Raisins, velour, the Hacky Sack, neon. Thinking the 1980s yet? These classics certainly had their moments of glory, but also limitations. Ground tire rubber (GTR) has a similar ‘80s story. The inclusion of GTR as an asphalt binder modifier was a game changer, and then it saw challenges like unpredictable performance, and various handling issues.

The Florida Department of Transportation (FDOT) can attest to these limitations, but has found a solution with GTRH, a combination of GTR and SBS. For FDOT, GTRH is a win because it helps mitigate the increased consumption of recycled tires by the State’s landfills. Professionals like contractor Atlantic Coast Asphalt (ACA) and liquid supplier Axeon in Florida are having positive experiences with GTRH, like their April 2016 4,000 mix ton project in Duval County.

The mix was placed on US Highway 1 (Phillips Highway) in Duval County, Jacksonville, Florida. The friction course covered both the Northbound and Southbound lanes starting just south of Interstate-295 and ending near the intersection of Race Track Road. Robbie Robinson, Senior Manager of Asphalt Technical Services at Axeon, reports: “The distance from the plant to the project was approximately six miles. ACA used FC-5 (an open graded friction course) (OGFC) with 6.6% AC content, 1% hydrated lime, 0.4% mineral fiber, and Evotherm® in order to lower the minimum ambient temperature placement of the mix from 60 degrees Fahrenheit (F) to 55 degrees F.” The mix was produced at 180 TPH with temperatures between 300-330 degrees F. The plant had no problems handling the GTRH binder and the plant indicators showed no differences compared to PG 76-22 PMA during start-up and production.

Atlantic Coast Aspalt used a Roadtec 2500C Shuttle Buggy and CAT 1055D Paver. GTRH was delivered to the paver through a MTV which resulted in a uniform mat. The asphalt mix was placed between 260 to 290 degrees F with no issues. OGFC’s like FC-5 serve as a drainage layer and do not require extensive rolling. The mix was seated in place by two Caterpillar 12-ton rollers. Mike Camillari at ACA, shares: “We were able to successfully meet the percent within limits (PWL) specifications, which was huge for us. We had no issues with the PG 76-22 GTRH and the mix looked outstanding. The superintendent and the screed operator were very complimentary of the mix and liked it better than PG 76-22 PMA.”