In the Amazon and indigenous lands of Brazil 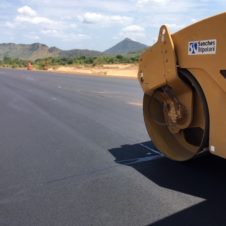 Adapted from an article by Alyssa Glazener, Ingevity

After success with Evotherm in December 2019, Brazil-based general contractor Sanches Tripoloni has plans to transition to all-Evotherm operations.

One benefit of Evotherm is that it enables a higher production rate, which allows contractors to place more pavement in a day. In a rainy climate where work days are limited, that’s a game-changer. When Sanches Tripoloni paused a job in the state of Amazon before the floods brought by the wet season (February to August), they were able to continue working at another job site in the northern state of Roraima. They anticipate returning to the Amazon job during the next dry season.

In the Amazon rainforest south of Manaus, the asphalt has worn away on parts of federal road BR-319. Sanches Tripoloni is working on the reconstruction. One of the job’s challenges is the cost of bringing in raw materials, which cost at least twice as much, due to transportation by ferry and backroads. The ferry carrying the aggregates took 6 days just to arrive at port.

“With Evotherm, we reduced the asphalt production temperature by 40 C, from 160 C to 120 C, which nearly doubled the production rate from their previous limit of 62 tons per hour to 120 tons per hour,” said Renan Ribeiro, technical sales at Ingevity, who was on-site in December.

Sanches Tripoloni paved around 3 miles using Evotherm. There are 19 miles left to finish the job.

Achieving the right compaction is key to a long-lasting, weather-resistant road. With Evotherm, the work crew can complete compaction at much lower temperatures than traditional hotmix asphalt.

“The cost savings captured during compaction from less roller usage, including less maintenance costs and fuel, are really important for the economic viability,” said Renan.

Sidney Camacho Ramos, construction manager at Sanches Tripolini said: “We saw cost savings in production and compaction with Evotherm, an increased production rate and better overall quality of the asphalt mixture we placed.”

Federal road BR-174 runs from the city of Boa Vista just north of the Amazon rainforest to the town of Pacaraima on the border with Venezuela. It also passes through multiple protected territories, home to hundreds of indigenous people, many of whom hold deeply rooted environmental values.

“Evotherm was essential to doing this job well,” said Hernando Macedo Faria, business unit manager at Ingevity. “We reduced the asphalt production temperatures by 50 C, from 165 C to 117 C, which resulted in saving 40% more fuel and increased production from 110 to 160 tons per hour.”

Evotherm provided more than enough workability to handle the 3-hour haul from the mixing plant to the job site and still construct a high-performing road. Sanches Tripoloni applied a 5 cm layer of pavement over a granular base along nearly 75 miles on BR-174.