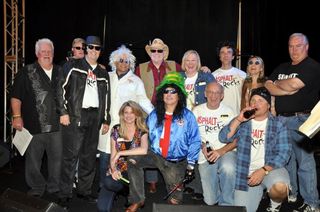 Lexington’s rock-a-billy nice guys haven’t tried for a full-on do-over of their 1990 smash hit “Under the Overpass” but on Warm Mix, they’re sticking with its upbeat vocals showcasing frontman Fuzzy’s images of life in the asphalt jungle. The band has created a tribute website and announced it's going back into the studio to create a one-time reunion CD of their greatest hits.

“It was a trip to see the band together again after all these years – Doc, Radical, Smokey, Billy Bob, Kitty and Fuzzy – I’ve missed you guys,” says Dean Frailey, one of the band’s original fans.

Check out this history of the band.