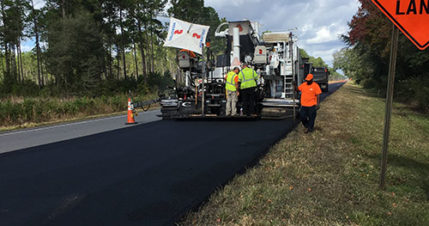 “We had been hit with almost $51,000 in penalties on a job mandated to use rubber because the bottom kept dropping out of the mix,” says Tim Carter, quality control at P&S Paving based in Daytona Beach, Fla. “These AC content anomalies were just killing us. Until Evoflex® RMA turned things around.”

Such was the predicament of Carter’s team at P&S Paving in November of 2016. They found themselves paving an 11-mile stretch of State Road 19 in Putnam County near the Ocala National Forest. Almost an hour and a half from the mix plant, Carter’s team began the 16,000-ton job using an alternative PG 76-22 asphalt rubber binder (ARB) for the 12.5 mm friction course mix. But after multiple attempts to meet density requirements, Carter’s team needed an alternative solution.

Enter Ingevity’s Evoflex RMA, a hybrid pelletized additive for mixes that mandate the use of rubber. RMA is unique because it combines ground tire rubber (GTR), SBS polymer and Ingevity additives into an easy-to-use-pellet. Evoflex RMA allows the use of existing plant blending equipment; consistently produces on-spec binders; and comes with the world-class technical support that customers expect from Ingevity.

“Many contractors think it’s extremely difficult to achieve density with a stiff binder containing rubber,” says Lance Brooks, technical marketing manager at Ingevity. “That’s just not true. This project was an hour and a half haul; was paved in cool November and December ambient temperatures; and had a PG 76-22 hybrid ARB binder. The binder even sat in the tank for almost two months after being blended at the liquid supplier’s asphalt terminal.”

“The specification required 93% density,” reports Carter. “We achieved 93 to 94 percent throughout the mat. We have worked with Ingevity and know the great technical service we get from the team, so this made our choice to use RMA much easier. But even for contractors or asphalt suppliers unfamiliar with Ingevity’s products, these results speak for themselves.”

Crew members on the job remarked about how easily the mix went down using the standard rolling pattern and were surprised to have such workable material with the stiff PG grade and rubber added.

“The Evoflex was a game changer,” shares Carter. “We went from scratching our heads and getting hit with penalties pre-Evoflex RMA, to celebrating and winning a bonus after we began using it. We made back almost all of our losses with RMA.”