Warming up the inauguration 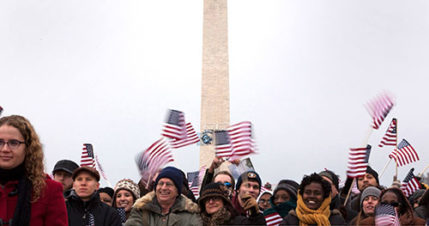 For over 200 years, the presidential procession and inaugural parade have marked the beginning of the new U.S. Commander in Chief’s term in office. Although the majesty of the procession and swearing-in ceremony garner most of the attention, the behind-the-scenes preparations for an event of such grandeur cannot be overlooked. Beginning months prior to the January 20th celebration, the parade route must undergo significant construction and beautification projects. It is here that Ingevity’s Evotherm® is making some history of its own.

As part of the infrastructure improvements leading up to the event, the blacktop along the parade route gets a facelift. The already-plunging temperatures in Washington, D.C. in late October are a large consideration when paving. For the second inauguration in a row, Evotherm warm mix asphalt technology was selected as the preferred technology.

Ryan Bragg, field and applications engineer, explains: “Usually the Washington D.C. Department of Transportation releases the bid for this project last minute and it typically becomes a rush to finish before the cold weather sets in. The contractor in charge was looking for a product that would help with compaction and workability in the cold weather because they would be paving a very thin lift (only 1-¼ inches) in 40 degree temperatures at night.” Traditionally, a lift this thin will experience rapid heat loss from both the surface it is being placed on, as well as the colder outside air. By using Evotherm, the contractor ensured a longer window for the crews to achieve required compaction numbers on this job during the last week in October.

“It is both humbling and flattering that Ingevity’s technologies continue to be the go-to choice for high profile projects. It’s a great testament to what our team has accomplished with Evotherm,” says Jonathan MacIver, business director. “Contractors in the D.C. area look to our warm mix technology when they must be able to meet compaction and workability requirements despite the cold weather.”

How can Evotherm bring some warmth to your next project?