From Parking Lot to Interstate in KY

The Walker Company of Kentucky recently performed their first warm mix jobs using Evotherm WMA. They began with their own fueling station parking lot and then moved on to interstate work on I-64. Art and Bryce Walker were both very happy with the way Evotherm performed on the two jobs. They were especially impressed by the workability of the asphalt. Ultimately, The Walker Company would like to convert all their remaining jobs to Evotherm warm-mix.  Paiky has a great album of photos on their Facebook page. 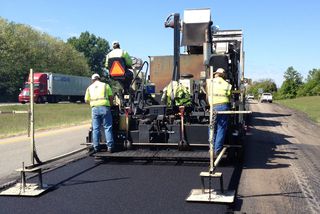 The first day of paving in Mount Sterling was a chilly 35°F. Evotherm was added to their PG64-22 asphalt tank early in the morning and recirculated for three hours prior to starting the plant. The plant was fired up at normal hot mix temperature, and after all parts were heated up the plant operator, Sammy, began to bring temperatures down. The plant leveled out at 250°F for the remainder of the day with no mix issues and good densities in the field. Kentucky DOT was on site to verify the mix.

Building on that success, The Walker Company began work on a 30,000 ton mill and fill project on I-64, twenty minutes from the plant. Again Evotherm was added to the PG76-22 AC tank and recirculated for several hours prior to start up. The 12.5mm mix was laid at 1.5" compacted. The mainline surface course, normally made at 340°F, was produced at 270-280°F – a reduction of up to 70°F.