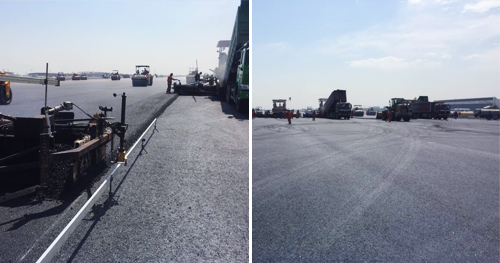 What do Atlanta, Beijing, Dubai, Los Angeles and Tokyo have in common? If you’re thinking airports, you’re on the right track. These cities consistently rank among the five busiest airports across the globe. Beijing in particular has held the number two spot for the last seven years and is an exciting example of Evotherm® warm mix asphalt (WMA) performing on the runway.

Over 94 million passengers flew through Beijing Capital Airport (BCA) in 2016. As many as 70 flights per hour can take off and land during peak times. In a nutshell, BCA is busy. It’s not hard to believe, then, that the middle runway was ready for a major rehabilitation project in April of 2017, despite previous smaller rehabilitation projects since 1996.

As any contractor across the globe knows, paving and maintaining an airport runway is never easy. The aging issues of most concern are block cracking and fatigue cracking. But Chinese contractor Beijing Sino-Aero Construction Engineering Co., Ltd. (BSACE) and Evotherm were ready for the middle runway at BCA. When searching for a product, the focus was maximizing compaction and consistency of the mix due to the stiff and difficult-to-compact mixture types on the runway.

“The middle runway needed major rehabilitation,” explains Yifan Yang, technical services at Ingevity in China. “This project lasted for four weeks in April and was a total construction area of almost 50 acres. It required speed in daytime and nighttime paving, so that the least amount of disruption to BCA’s traffic occurred.”

“Evotherm was chosen particularly because of the materials used in this project,” explains Lennon Dong, structural technical management for Ingevity in China. “These airport mixtures resulted in Marshall stability over 3,100 pounds (14 kN) at 140˚F (60˚C), along with rutting resistance of over 10,000 passes per millimeter when measured with the Chinese wheel rut test.” The bottom course applied by BSACE contained a high concentration SBS and an anti-rutting agent, and the wearing course mix was a polymer modified stone matrix asphalt (SMA) mixture with a high concentration SBS, an anti-rutting agent and glass fiber additives.

BSACE had two mix plants set up for the project and Evotherm was added as the tank trucks were unloaded. The runway’s pavement structure consisted of about 2 inches (5 centimeters) of warm SMA surface layer, another 2.5 inches (6 centimeters) of warm dense-graded middle layer mixture, and 3 inches (8 centimeters) of modified WMA mixture for the bottom layer.

“Evotherm provided many benefits on this runway project,” says Merlin Zhou, technical marketing management with Ingevity in China. “We saw significant improvement in the workability of high viscosity and stiff asphalt mixtures typically used on runway pavements. We also encountered windy conditions during night paving and found the Evotherm helped greatly with compaction despite the windy conditions.” As an added bonus, BSACE completed the project three days earlier than expected.

Beijing National’s runway is another global win for Evotherm at airports. Contact us here to learn more about Evotherm abroad.