SCDOT and Sloan rebuild I-85 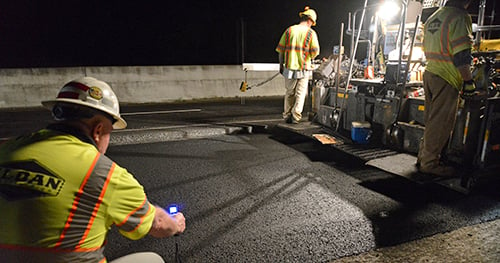 A unique design for warm mix asphalt (WMA) enabled the South Carolina DOT (SCDOT) and its contractor, Sloan Construction, to get a mid-winter start early in 2016 on urgent reconstruction of failing I-85 in the northwestern corner of the Palmetto State. Because WMA can be compacted to required density at lower ambient temperatures, it can lengthen the paving season by enabling winter paving.

The warm mix additive also served as a compaction aid that permitted Sloan to quickly get specified density on twin lifts totaling nine inches, in time-limited night work, to avoid severe penalties for failure to reopen the highway in time for the morning rush in the busy Spartanburg—Greenville corridor.

On this project, in a single one-night shift, as much as nine inches of delaminated, failed pavement would be milled, and the warm mix additive Evotherm® allowed placement of two, four and one-half inch lifts in that single shift, rather than the three, three-inch lifts that would have been required under standard specs, making it impossible to open the pavement by morning rush hour.

The I-85 work was taking place between mile marker 56 to 68, milling out left and center lanes from five to nine inches, and for the right hand lane, milling out 10 inches and putting nine inches back.

“The DOT realized that, in starting the project last year, the structure of the road didn’t hold up the way they wanted it,” said Dennis Ayers, senior project manager for Sloan North Region. “They re-let the contract to put in a new base course and reconstruct the road to handle the traffic.”

“When we first started we were going to do a two or four inch mill-and-fill,” said Chad W. Hawkins, P.E., C.P.M., state materials engineer, SCDOT, Columbia. “But some of the milling process got down into delaminated areas, and that’s when the project was put on hold, and we thought ‘What do we do now?'”.

The pavements in this section were constructed in the 1950s and 60s, so finding out what went wrong is problematic. “Realistically, our two, three and four inch mill-and-fills over the last 50 years have caught up with us,” Hawkins said. “It’s time to do a major reconstruction, and that’s what were finding on a lot of our interstates. We’re having to do more than put a four inch ‘band-aid’.”

On a night in the northbound lanes in July 2016, crews were milling out 10 inches of failed pavement, and were replacing it with two, four and one-half inch lifts of leveling course pavement. They paved 1,000 feet in a single night shift, leaving room for the final driving course.

There, Ingevity’s Evotherm enabled Sloan to get density on the first lift, and place the second four and one-half inch lift right on top of the first. Both lifts cooled rapidly to permit timely opening to traffic on the second lift.

Target densities were being met on site and in test strips. Also, Sloan was getting 93 percent density on the cold longitudinal joints, which go down nine inches. “The job is going well,” said Todd K. Carroll, P.E., resident construction engineer, SCDOT, Spartanburg County. “They are able to produce a lot of mix every night, very efficiently. We’ve had a good project so far.”