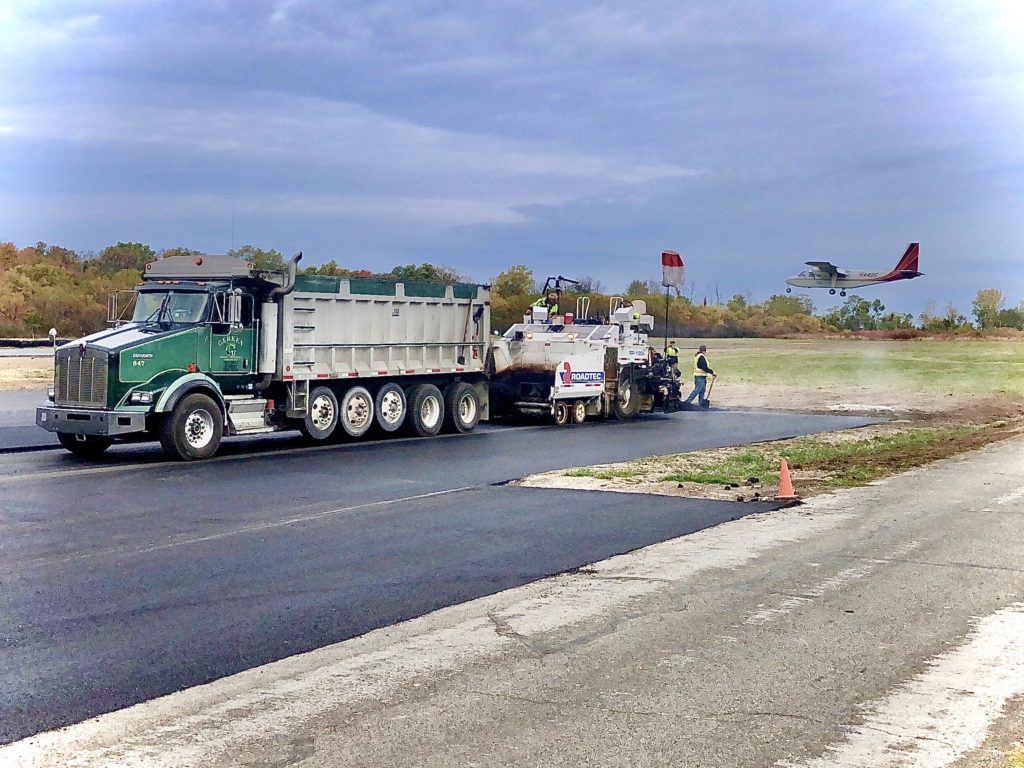 “When most would have seen the paving of a remote island airport runway as a logistical nightmare, we accepted the challenge and accomplished a pretty remarkable feat,” said Gerken Companies’ Kyle Borstelman, Eastern division area manager. “We had a logistical plan and a mix with Evotherm® we knew we could trust.”

Although North Bass Island (NBI) has been established since the 1860s, it’s unknown to many.

Despite its relative seclusion from development and inhabitants, NBI operates NBI Airport that includes an almost 2,000-foot paved airstrip used by mostly general aviation aircraft like single-engine planes. Air traffic for take-off and landings to the north are complex because the Canadian border is challenging to avoid with less than 2 miles separating it from the runway threshold.

The runway serves the small population on the island with mail service, shuttles students to a high school off the island, and provides transit to the mainland. In October of 2019, the runway had seen almost 25 years of use and needed repaving.

The Gerken Companies have worked for over 60 years successfully building and improving infrastructure throughout northwest Ohio and southeast Michigan as one of the three large asphalt production and paving companies in the Great Lakes area.

“When it came time to pave this project,” explained Jim Shoemaker, quality control manager at Gerken, “we chose Evotherm as a sort of insurance policy for the long haul, trying to ensure the mix remained workable over the hours-long trip the trucks would make from the plant to lay-down. The specification on the project involved a percent-within-limits (PWL) specification with a bonus for how closely inside the density boundaries our actual measurements were. Warm-mix was the only way we could accomplish this.”

It was a sunny, 50-degree morning in October when the paving process began. But the preparation for this monumental job began far before the day of paving. Gerken faced a challenging trifecta.

First, the project was approximately a 6-hour round trip from the plant to the ferry, across the water to the island, and then across the island to actually pave the runway. Second, the ferry and the ramps at the dock – once on the island – had restrictive weight limits, which meant the trucks would have to cross over and back only a few at a time and the docks would have to be reinforced before paving could occur. Lastly, the Gerken team couldn’t use the basic roads on the island that led to the runway, so as not to cause any damage with the weight and volume of the tank trucks.

Over the water and through the vineyards

Despite what seemed like three incredible obstacles, Gerken trusted its team and leveraged its relationships with local authorities to help complete the project successfully.

To address the issue of weight limitations at the dock, Gerken waited to begin paving until dock reinforcements were made. Their team then had to make their own temporary roads from the dock to the runway, which meant that Gerken mowed a one-mile portion through former vineyard lands with the quickest possible access to the runway. But not even the mowing was simple: The year had brought quite a bit of rainfall so the vineyard fields were damp and soggy. The prime contractor on the job had to roll and add stone to the wet areas of the route to ensure Gerken’s trucks and other vehicles on the job wouldn’t leave massive divots or – even worse – get stuck.

“We utilized our Parkertown, Ohio, plant for this project, which is located almost an hour from the Catawba Island ferry,” explained Shoemaker. “Plant production temperatures were around 310 F in order to see how much temperature loss there would be and how the mix would react after the ferry transit and then finally during lay-down.”

At the ferry location, four ferries were reserved exclusively for the day’s paving. The 11-mile ferry ride across Lake Erie was another hour, and once the trucks were off the ferry and on dry land again – the dancing began. The paving process was comprised of 16 trucks that ran in groups of four, making a total of about 250 trips to the island throughout the course of paving.

The existing runway was milled out and the base was replaced. Two, 2-inch lifts were placed with a PG 64-22 P403 mix, a typical blend for a runway carrying aircraft less than 12,500 pounds. The first loads behind the paver were around 290 F and densities met the PWL specification, averaging between 93.5 to 94.5%.

“Even before we were seeing densities, we were confident the plan was working,” said Adam Shaefer, Evotherm technical specialist. “We passed four full trucks at the halfway point on the lake when we were headed back to the mainland with four empty trucks. When we hit try land, the next four loaded trucks were arriving from the plant ready to board the ferry. It was like clockwork.”

“There was one last challenge to consider as the day of paving progressed,” said Borstelman. “The project was scheduled to take around 2 weeks but bad weather was headed the island’s way about a week into paving. So we had to make a big decision. If we didn’t finish the runway within the day, completion of the project would have been postponed until sometime in 2020. As a team, we chose to continue paving that last day, which meant we finished the runway in a 25-hour day. If you’d told me this would be the case at the beginning of the day, I would have never believed it.”