Mike O’Leary is a big deal 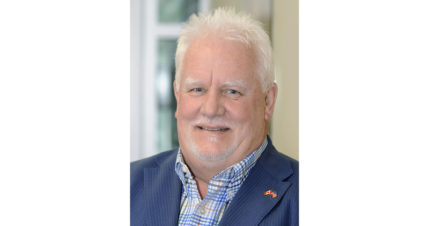 Anyone who knows Mike O’Leary knows that he is, indeed, a big deal. But if you tell him this, he will smile humbly and say how lucky he is to work in a field with people he enjoys. This is just one of the many qualities about Mike that is award-winning.

After more than 40 years in the industry, Mike was honored by the Association of Modified Asphalt Producers (AMAP) with the 2017 Lifetime Achievement Award and induction into their hall of fame. At AMAP’s Annual Conference and Workshop on Feb. 8, member organizations including Ingevity thanked Mike for advancing technology in the asphalt industry.

Mike joined the Ingevity team in 2004 and strategized the commercialization of our Evotherm® technology. “I was first a customer of Ingevity’s as an emulsion producer,” said Mike. “I saw a lot of respect between the people here and I came to know Ingevity for its integrity, technology and quality.” He continues with Ingevity as a consultant for commercializing new pavement technologies.

The Lifetime Achievement Award is fitting for a man who has contributed so much to the evolution of the pavement industry. Throughout his career, Mike has applied his rare brand of diplomacy to reach out to all sectors of the asphalt pavement supply chain, including industry, academia and government, to gain the acceptance and adoption of technological advancements. “Somewhere along the way a colleague said I operate like an ambassador,” said Mike. “The nickname stuck and to this day, I am often greeted among industry professionals with a friendly, ‘How’s it going, Ambassador?’”

AMAP describes Mike’s value-add focus this way: “It is his humble but indefatigable ambassadorship that distinguishes Mike’s influential, career-long advocacy for our industry: four decades of tireless engagement in an unbroken chain of friend-to-friend conversations about the right things to do to build longer-lasting, sustainable asphalt pavements.”

Mike also contributed his unique expertise to identifying and achieving the strategic goals of numerous industry association boards and committees. “Mike is an unparalleled strategist and tactician in the pavement industry,” said Everett Crews, director, research and development at Ingevity. “We have benefited immeasurably from his counsel, dedication and friendship.”