Mexico City Mayor Marcelo Ebrard has officially announced that all asphalt mixes to be laid down within the Federal District of Mexico City should meet Warm Mix Asphalt specifications. Mayor Ebrard is head of the World Mayors Council on Climate Change and was recently elected World Mayor by that international body. During two years of development and evaluation at Mexico’s City’s two asphalt plants, it was shown that WMA technology substantially lowered mix plant stack emissions while providing a 45% reduction in fuel consumption and carbon dioxide emissions. This is a vital improvement because the Mexico City Federal District is located in a broad, high-altitude valley where air pollutants are easily concentrated into a thick pall of difficult-to-disperse smog. 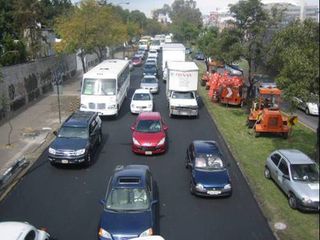 WMA also brings construction benefits to Mexico City’s paving contractors. Sitting at over 7300 feet elevation, the average nighttime temperature is 50 F. Paving is done exclusively at night to minimize traffic congestion. Use of WMA technology has allowed contractors to achieve better densities under these cold-weather, night-paving conditions. Mayor Ebrard’s decree to make Mexico City a WMA-exclusive city is a bold move that well may be followed by other mayors of major world cities facing air quality challenges.