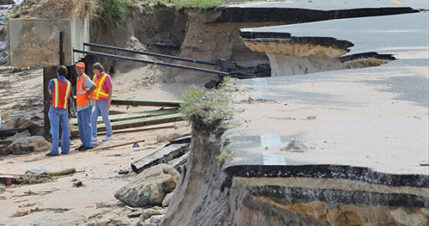 “When Hurricane Matthew damaged over a mile of Florida’s A1A in Flagler County last October, time was of the essence,” explains Fred Iannoti, purchasing manager at Halifax Paving in Daytona Beach, Fla. “Governor Scott wanted A1A opened in 15 days. Normally, it takes between 45 to 60 days just to get work started. But in this case, bids were submitted on a Friday, evaluated on Saturday and awarded on Sunday. Halifax started work Monday and the road was reopened just 29 days later.”

It was hard to miss the scare that hit the southeastern and northeastern U.S. coast in the form of Hurricane Matthew during the fall of 2016. This tropical cyclone became the first Category 5 Atlantic hurricane since Felix in 2007. When large portions of state road A1A in Flagler County were destroyed, Halifax Paving looked to Evotherm® to rebuild the 1.3-mile stretch  from Ninth Street North to 22nd Street North.

“Our jobs before Evotherm were challenging,” reports Iannoti. “The mixes were gooey, difficult to compact and we were struggling with other mix issues as well. We needed reliability, mix consistency, workability, a compaction aid and a liquid anti strip.” Halifax began incorporating Evotherm into various projects in 2014 after considering how it could help them address their mix challenges while also meet FDOT’s specifications.

Catch glimpses here of some of the damage sustained along A1A courtesy of the Miami Herald online.