Faces of Evotherm: Will Cabell 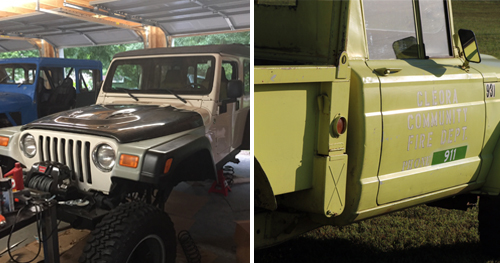 If you need help choosing a 1960s Ford Bronco or rebuilding an older model Jeep, Will Cabell is your guy. He’s an Evotherm® applications engineer by day, and is into all sorts of hobbies in his off time. Will not only has an eye for mid-1900s-model cars, but he also has a knack for getting them back into working order; serves in the U.S. Marine Corps reserves; and is as genuine a guy as they come. Perhaps it’s his affinity for repairing things that inspires his ability to implement Evotherm injection systems and help customers maximize their performance of the product on the job. We can’t say for sure, but we encourage you to get to know this all-American patriot.

What’s your idea of happiness?

Driving the Trans-America Trail. It’s a 5000-mile, off-pavement motorcycle ride across America that starts in southwestern N.C. and ends at the Pacific Ocean in southwestern Oregon.

Your idea of misery?

If not yourself, who would you be?

In the Pacific Northwest somewhere.

Who is your hero?

What natural talent do you wish you had?

It would be great to be able to sing. Unfortunately, I’m tone deaf.

Name one thing about your work that gets you out of bed in the morning.

I like the variety of my job. I seldom do the same thing daily.

What’s your favorite memory from a project?

My first Evotherm project was at Parris Island, S.C., on the third battalion parade deck. Little did I know, I’d be back a year later as a U.S. Army reserve recruit.

When Will isn’t working as an integral part of the Evotherm technical team, he can be found with his hands elbow-deep in the guts of the gem he just purchased: a 1967 Kaiser retired brush fire truck that was previously owned by the Army’s 227thAviation Regiment. He’s also guilty of working on his other prize, a 2006 Jeep LJ Unlimited that he plans to finish in the next few months. And when Will can break away from his cars, he can also be found tinkering away on a sailboat or two, and eating tacos for every meal. We are grateful for Will’s service to our country and our Ingevity team.