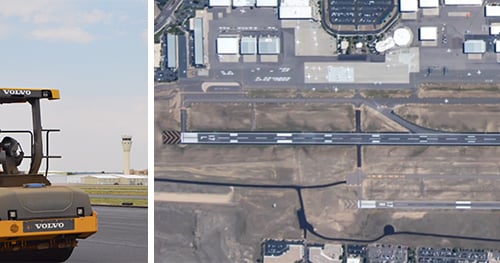 Centennial Airport in Englewood, Colorado, just 15 miles southeast of downtown Denver, has won the Colorado Asphalt Pavement Association’s (CAPA) 2017 “Best in Colorado” Award in the Airport category. The award celebrates quality achievement and recognizes the best in asphalt pavement construction in Colorado each year. This runway project was no easy feat: a high-quality, end-result pavement completed in a short period of time amidst complex phasing. You won’t want to miss all the details.

Centennial is the only general aviation airport in Colorado to have a 24/7 FAA-staffed air traffic control tower and it is also home to seven flight schools. The use of its three runways is limited by weight. Any aircraft that exceeds the 75,000-pound weight limit must have special permission.

What would rehabilitation on one of Centennial’s runways look like? Contractor Aggregate Industries WCR (AIUS) knows very well. They worked on a 32,000-ton runway project during the summer of 2017.

AIUS, a subsidiary of LafargeHolcim Ltd., used a FAA-approved P-401, PG 64­-28 mix with a ¾-inch maximum grading. Ingevity’s Evotherm® WMA was added at 0.3 percent by weight of binder.

“We chose a warm mix additive in this mixture because the voids in mineral aggregate (VMA) specification required a 15 percent minimum,” said John Cheever, quality control manager at AIUS. “And we couldn’t achieve that with just 1 percent lime. We also had to meet specific compaction requirements and needed a sure bet to help us make the project a success.”

“The complexity and difficulty of the project was tremendous given the unique circumstances we faced,” continued Cheever. “The runway that was rehabilitated served the majority of the typical jet traffic. It was important to ensure the project didn’t shut down the airport so that airport users were relatively uninterrupted.”

This required complex phasing and traffic management to allow aircraft to utilize the parallel runway and to cross the runway under construction in order to access the airport.

“The completed runway saw excellent joint densities,” explained Cheever. “Overall, higher mat and joint densities were seen, which I would attribute to the added workability of the mix.” There were no disincentives on the P-401 elements of the project.

It is no surprise that when it came time for submissions for CAPA’s 2017 “Best in Colorado” awards, the Centennial Airport runway project received high praise. The project scored above award-contending numbers in the Appearance, Segregation, Longitudinal Joints and Complexity-Difficulty categories for the Airport award.

“The ride was extremely smooth,” commented Cheever. “This is very important on a runway requiring high-speed aircraft operations. The project went well and we are proud that it turned out to be an award winner.”