Evotherm WMA placed on California's State Route 1 still looks good three years later. There's no HMA control, because HMA couldn't make the haul distance. MWV stopped by the "old" jobsite this July while paving the same road in nearby Fort Bragg, CA, to give the road a visual check-up and take a picture.

In September 2008, Evotherm was chosen for a long-haul Caltrans demonstration project, in which both dense-graded and open-graded asphalt mixes were produced at conventional hot mix temperatures at the Syar Industries, Inc., plant in Santa Rosa, CA. The mix was hauled to the Pacific Coast Highway at Point Arena on the coast north of San Francisco, a four-hour drive through the mountains.

The project involved thin-lift asphalt resurfacing of the two-lane highway to a depth of 1 1/2 inch. For the dense-graded portion, to beplaced in a portion of the road subject to local flooding, the grade of asphalt binder was specified at PG 64-16 with aggregate complying with Caltrans' 1/2-inch top-size grading. On the OGFC section, PG 58-34 polymer moified binder was used with 1/2-inch graded aggregate treated with liquid anti-strip. 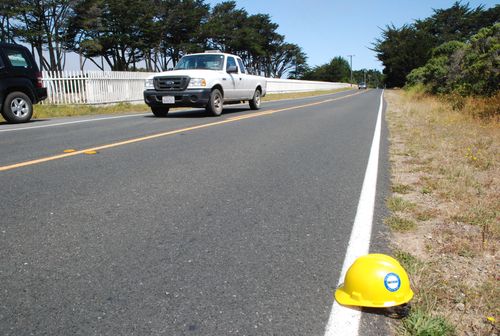