A world-traveling polyglot and astute businessman, Eric Vandewalle believes the key to success is to never stop learning. As the global business development manager for Lubricants, Eric is responsible for just that. Learning ways to grow Ingevity’s market share through executing a global strategy, conducting market research and assisting with product development are some of his main duties. Eric has been with Ingevity since 2002 in various roles and his experience encompasses both technical marketing and sales. He has a chemical and project engineering degree from the ENSIA7 from Toulouse and the Ecole Centrale de Marseille. Born and raised in Paris, France, you can find Eric taking pictures around the city, watching football at a local pub or adding to his extensive book collection.

Tell us about the experience you bring to your role and what you do at Ingevity.

I work closely with the commercial and technical teams to develop new products for existing applications or to find new applications for products in our current portfolio. I’ve been with Ingevity for 16 years, originally an account manager for our EMEA Pine Chemicals business. I was first tasked to grow the TOFA business and focused many efforts on metalworking fluid (MWF) applications. Prior to Ingevity, I spent seven years at Shell as a technical marketing and sales manager for the grease business where I learned the ins and outs of the lubricants industry. 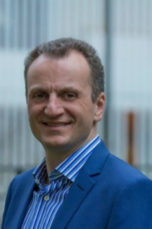 When I was selling pine chemicals 15 years ago, I took an interest in Diacid 1550’s potential of use across various applications. During that time, Diacid 1550 was known to most customers as a single-functional corrosion inhibitor. After conducting thorough market research, I realized there was an unmet need for a multifunctional MWF additive. Knowing Diacid’s unique chemistry, I worked with the technical team to conduct various tests that revealed the product’s various performance advantages. Eventually, we relaunched Diacid 1550 with a multifunctional approach highlighting the product’s four benefits: corrosion inhibition, co-emulsification, lubrication and wetting. Through this process, our team successfully changed the market’s perception of Diacid 1550 and grew the business exponentially.

If not chemistry, what other field would interest you?

Astronomy! I’m somewhat of an “astrophile” and have developed a passion for astronomy over the course of my life. It all started when I was 12 years old camping on a beach in Greece. Our guide knew the constellations by heart and inspired me to take up a new hobby. Two years later, I got my first telescope and the rest was history.

Do you have a nickname your friends and family know you by?

Many refer to me as “Il Paparazzo,” Photography became another passion of mine at a young age and I’m usually seen traveling with a camera in hand. Photography has also complimented my love for astronomy, as I enjoy capturing celestial objects through the lens.

What is special about where you grew up?

Growing up in Paris, I had a great exposure to international cultures. The city is such a melting pot and I was lucky to learn about so many different backgrounds. It also encouraged me to learn many languages! (He is fluent in French, English, Spanish and German)

Do you have a life motto?

Let us not judge people by their intelligence, but what they are capable of achieving with it.

Who has inspired you in your career?

French-Polish physicist Marie Curie influenced my career path in engineering. As the first woman recipient of the Nobel Prize in 1903, shared with her husband and Henri Becquerel, amongst many other admirations, she achieved so much while the odds were stacked against her. She even received a second Nobel Prize in chemistry in 1913. I read her biography when I was 14 years old and that book made me choose chemistry as my path in life.

What’s something people would be surprised to know about you?

I took up traditional Vietnamese martial arts, known as Vovinam, at 47 years old. I enjoy the physical challenge as well as learning the history behind this method of self-defense.

Learn more about industry events Ingevity's MWF team will be attending this year.